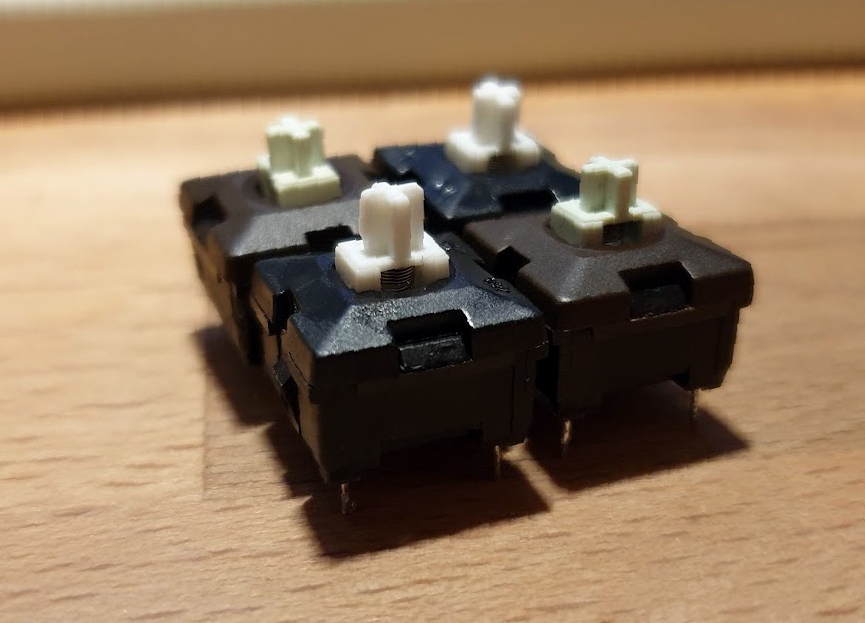 Hello, I am insane and recently purchased four Olympia Carrera typewriters. Now, you get to benefit from my idiocy.

This series of switch is basically previously undocumented, and was thought to be very rare. The latter part is pretty much completely untrue. Let's get properly into it.

Variants
There are two variants of this switch - and I can confirm that in this post. What's more, they have significant internal differences. Firstly though, let's look at the commonalities. Both switches share the same bottom housing, including integrated diode, and contact module. They also share a similar method of action - i.e. that the slider makes contact with a separate part, which then puts pressure on the contact module. Past this is where the differences begin.

Brown top variant (Marquardt Series 6180 Brown? Mint Green?)
This is the earliest version of the switch I've found - in an Olympia Carrera manufactured at least before 1986. It has a dark brown top housing, and a slightly mint green slider. The slider is MX mount, and slides past a semi-free-floating contoured plastic rocker (it merely rests in a recess in the top housing) with a peg on the other side. This peg is what puts pressure on the contact module, closing the circuit. The switch weighting is in the ballpark of MX Black, and has 4mm travel. When fully depressed, the slider is completely inside the housing.

Black top variant (Marquardt Series 6180 Black? White?
This variant of the switch was found in a 1988 manufactured Olympia Carrera. It has a completely black top housing and white slider. The slider remains MX mount, but is slightly taller than the brown variant and has a notch, and instead of a plastic rocker, it slides past a uniquely shaped leaf spring, which rests in a slit in the top housing. It has a prong which puts the pressure on the contact module. This switch is significantly heavier (through unscientific measurement, I put this somewhere in the range of 10-20gf heavier - I believe this to be a combination of a stiffer return spring and weight from the leaf spring). It still has 4mm travel, but the slider is slightly outside of the housing at bottom-out. It should be noted that the difference between the plastic rocker and the leaf spring makes the black and brown top housings two-way incompatible with each other.

Sources
These switches can be found in Olympia Carrera typewriters, which are exceedingly common. Note that this is the Carrera only, as far as I am aware - Carrera Si, De Luxe, etc need not apply. However, more than one instance of this typewriter I have bought has come with Cherry MX Olympia Linear Clear switches, so your mileage may vary.

Takeaways
Pretty much everything the community knew about this switch was wrong. It is legitimately a series, consisting of at least two variants (and possibly more - there are two keyboard part numbers for Carrera typewriters I am still unaware of). They are nice switches that can be had for pretty cheap, and given that Carreras came with covers, are fairly likely to be in good condition.